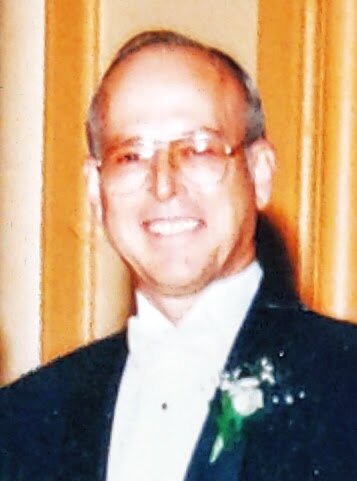 In his early years, Frank was a veteran of the US Navy where he served on the USS Sturtevant (DE-239) destroyer escort ship. He later became an office manager for various companies including Simoniz, Morton Salt, Bemis Bag Company, Hudson Pulp and Paper, and Consolidated Stamp Manufacturing.  For many years, he sang in church choirs at St. Paul's in Monee, IL, and St. John's in Arlington Heights, IL.  Frank also served many years as a Scout Master in the Chicago area Boy Scout Troop 211.  In his retirement he worked as a horse trail guide at the Nanchas Elk Ranch.

Frank very much enjoyed the outdoors, camping, fishing, boating, horseback riding, travelling and chopping wood.  He loved animals, bred and showed championship Great Danes, and Kerry Blue Terriers.  In his retirement he spent many days fishing on the Wisconsin Dells river where he lived.

Visitation for Frank will take place Tuesday, August 16, from 9:00 am until time of services at 11:00 am at the Krueger Funeral Home, 13050 S. Greenwood Ave., Blue Island.  Interment Skyline Memorial Park in Monee, followed by a luncheon.

Share Your Memory of
Frank
Upload Your Memory View All Memories
Be the first to upload a memory!
Share A Memory
Send Flowers