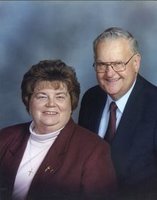 Donald E. Mentz, 87, of Channahon, formerly of Orland Park, passed from this life Tuesday, October 8, 2019. He was the beloved husband of the late Barbara nee  Jager. Donald is the loving father of Linda Smith and Sandra (Michael) Austin. He is the devoted grandfather of Christopher (Ashley) and Erica Austin and the proud great grandfather of Grady, Cohen, Arielle, Ainsley and Grace. Donald was the dear brother of the late Marilyn Slingerland.

Donald was a United States Air Force veteran serving in Korea during the Korean War and a member of the American Legion. He was formerly employed by Martin Oil for forty-five years. Donald was a faithful member of Christ Lutheran Church of Orland Park.

A private interment will be held for Donald at Cedar Park Cemetery.

Share Your Memory of
Donald
Upload Your Memory View All Memories
Be the first to upload a memory!
Share A Memory
Plant a Tree