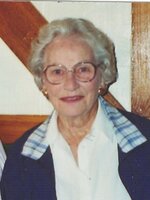 Mary was born October 6, 1923 in Blue Island to the late Nancy nee Waddicar and the late Soloman Travis. Mary was a lifelong resident of Blue Island and was a Past Matron of The Order of The Eastern Star, Chapter #789.

Mary was the beloved wife of the late Richard D. Bell. The couple were united in marriage September 11, 1954.  She is the loving mother of John (Susan) Bell and James Bell (Becky Sperry) and was preceded in death by her four siblings; Willard, Nancy, Florence and Frank.  She is the cherished aunt of Jolyn, Leanna and Frank and the dearest friend of Laura Villanueva.

Services and interment are private. Mary will be buried next to her late husband, Richard, in Mt. Hope Cemetery.