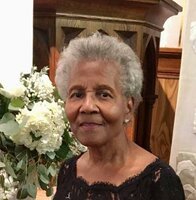 Lula Johnson was born April 6th, 1937 to Alexander and Ethel Brown in Indianola, Mississippi. There are no words, or enough space to adequately show what Lula has done with her life. She simply led each day as a Christian woman, wife, mother, sister and friend. Her love and legacy will live on with everyone who had the privilege of knowing her. Lula is a faithful member of Salem Ev. Lutheran Church of Blue Island and was a former longtime member of Timothy Lutheran Church (1700 W. 83rd St.) until its closing, where she was a member of both the choir and PTL. She was employed for over thirty years at CNA Insurance in Data Processing. (CNA Headquarters/Van Buren and Wabash). Lula had been a volunteer at Little Company of Mary Hospital for several decades. Lula’s faith in God and a promise of eternal life was realized on January 15th, 2022. She leaves to cherish her memory two children, Louis “Shannon” (Jennifer), Lisa, one grandson Evan (Hillary), eight siblings, Mable Rush (James deceased), Alexander Brown, Joe Louis (Doretha) Brown, Alvania Hannah (Johnny deceased), Sylvia (James) Moragne, Charles (Rosalind) Brown, George (Dorothy) Brown, Roland (Frances) Brown, a host of nieces, nephews and a dear and cherished friend Schlosburg Whitaker. She was proceeded in death by her husband, Louis and four stepchildren, Carolyn Johnson, Charlene Burns, Brenda Johnson and Ronald Johnson. Well done, good and faithful servant! – Matthew 25:23 Visitation for Lula will be held Thursday, January 20, 2022 from 5:00 pm to 8:00 pm at the Krueger Funeral Home, 13050 S. Greenwood Ave., Blue Island. Services will be conducted Friday, January 21, 2022 at Salem Ev. Lutheran Church, 12951 Maple Ave., Blue Island. Lula will lie in state from 10:00 am until the time of service at 11:00 am. Interment will take place at Cedar Park Cemetery in Calumet Park.