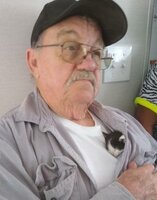 Richard A. Schroeder, 79, of Glenwood, passed from this life Wednesday, December 8, 2021. Richard was born October 26, 1942 in Harvey to the late Helen nee Johnston and William Schroeder. He was a retired truck operator for Prairie State Concrete and formerly employed by Spirit Farms of Ottawa and Arctic Snow Removal. Richard was devoted to his family and enjoyed nothing more that spending time with his grandchildren and great grandchildren. He also liked to fish and hunt. Richard is the beloved husband of Janet R. nee O’Lena. He was the loving father of the late Richard H. Schroeder and the late Ronald A. (Margaret) Schroeder. Richard is the cherished grandfather of Ricky Schroeder, Patricia Schroeder, Janet (Josh) Kanger, Michelle E. Schroeder, Julie A. (Carlos) Nava and Melanie Schroeder and the proud great grandfather of Phoenix, Ayden, Shyanne, the late Reanne, Anthony, Maddison, Lilith, Abigail, Zackary, Riley, Cecelia, Killian and Robert. He was the dear brother of the late William (late Josephine) Schroeder and the late Robert (late Jean) Schroeder. Richard leaves many other family members and friends to cherish his memory. A memorial visitation will be held Friday, December 10, 2021 from 3:00 pm to 8:00 pm and Saturday from 9:00 am until 11:00 am at the Krueger Funeral Home, 13050 S. Greenwood Ave., Blue Island. Cremation is private. A luncheon will be held Saturday after the cemetery service for Ronald at: Crete Park Distict, Easter Day Hall, 515 First St., Crete, IL 60417. Please visit our website for Ronald A. Schroder, thank you.