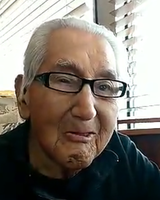 Senovio H Martinez age 101, of Blue Island passed from this life on Friday July 9, 2021 peacefully in his sleep. Senovio was the beloved son of the late Selso Martinez and the late Maria Martinez Serbantez. He is survived by his youngest brother Selso (the late Leonor) Martinez. Other siblings include the late Consuelo (Leo) Zamora, the late Gregorio Martinez, and the late Elizabeth (Rito) Evans. Senovio was uncle to Nine, Great Uncle to Nineteen, and Great Great Uncle to Twenty nieces and nephews. Senovio; lovingly known to all as “Uncle Penny”; was born on October 30, 1919 in Blue Island Illinois and was a lifelong member of the Blue Island community. In his early life Senovio was a United States Army glider serving in World War II. Upon his return from active duty he was employed by The Rock Island Railroad where he worked as a Switchman and Carman until his retirement. Uncle Penny faithfully enjoyed watching his favorite teams : the Chicago Bears and Chicago Cubs. He was always happy to sit and share stories from his time overseas and at the railroad. He was loved by many and will be missed by all ❤ Visitation for Senovio will be held Tuesday, July 13, 2021, from 3:00 pm until 8:00 pm. Chapel prayers will be conducted Wednesday at 10:00 am at the Krueger Funeral Home, then to St. Benedict Church, 2339 York St., Blue Island, for mass at 11:00 am. Interment will take place at St. Benedict Cemetery in Crestwood.