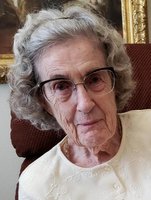 Edith M. Van de Roovaart nee Lounsbury, US WWII veteran, formerly of Blue Island, passed from this life Friday, July 31, 2020 in California at the age of 100. Edith was the beloved wife of the late Dr. John F. Van de Roovaart, who passed away February 26, 1996. She is the loving mother of John F. Van de Roovaart, Paul J. Van de Roovaart and David B. Van de Roovaart and the cherished grandmother of Paula Freitas, Elizabeth Smith, John Van de Roovaart, Paul Van de Roovaart, Jacob Van de Roovaart, Amanda Wasserman, Sara Van de Roovaart, Peter Van de Roovaart, Jeremy Van de Roovaart, Matthew Van de Roovaart and Hannah Van de Roovaart. Edith is the proud great grandmother of Caleb Wasserman, Emily Wasserman, Gemma Van de Roovaart, John Van de Roovaart, Addyson Van de Roovaart, Noah Smith, Ella Smith and Micah Smith. She is the dear sister of the late Robert Lounsbury, late Gertrude Hoyt and and the late Arthur Lounsbury. Edith was born January 14, 1920 in Oak Park, Illinois to the late Harvey J. and Margaret nee Vandercook Lounsbury. She was a remarkable self-sacrificing woman who lived her life in dedication to her family and her country. She attended college and received her Bachelor's Degree in Education. At the age of 22, she began a career as a Home Economics teacher at Galien Township High School in Galien, Michigan. At the age of 24 she entered into United States Navy serving with the Women Accepted For Volunteer Emergency Service aka WAVES. She was stationed in Washington, DC in the Communications Division. She served her country proudly from 1944-1946. On October 25, 1946 she married Dr. John F. Van de Roovaart in Glen Ellyn, Illinois. The couple began their life together in Blue Island, where Dr. Van de Roovaart had offices in a home on the north-west corner of York & Greenwood and also in the Masonic Temple building. Edith was devoted to her family, working tirelessly to make sure they had all their needs met and that the household ran smoothly. She enjoyed spending time gardening and taking sewing classes. She could often be found pressing clothing and linens on her mangle! In 1987, Edith and John relocated to Pleasanton, California to begin their retirement years. Edith found great joy in spending time with her children, grandchildren and great grandchildren. As they were learning about the progression of the world in their history books, Edith would share with them her first hand experiences. Recalling such events as The Great Depression, all the World Wars and conflicts, the discovery of penicillin, satellites, jet engines, and of course, the advancements in technology! A true testament to "The Greatest Generation", Edith's legacy will live on in the hearts of all who were fortunate to have known and loved her. Graveside services will be held Friday, August 14, 2020 at 10:00 am at Mt. Hope Cemetery, 11500 S. Fairfield in Chicago.