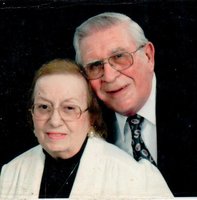 William C. Heer, 89, of Blue Island, passed from this life Sunday, February 2, 2020. William was the beloved husband of the late Roseann J. nee Spinazola, who passed away April 13, 2012. The couple were united in marriage August 9, 1952. He is the loving father of Daniel Heer, Mary-Jo (Darryl) Andersen and Joseph Heer. William is the proud grandfather of Darryl Andersen Jr., Jennifer Andersen, Tony Heer, Kendall Heer, Vinnie Heer, Violet Heer and the late Angelina. He is the dear brother of Benjamin Heer and the late Kenneth Heer and the late John Heer. William was born August 17, 1930 in Blue Island to the late Rose Mildred nee Greig and Benjamin Solomon Heer. He was a United States Army veteran serving in the Korean War, earning one Bronze Star. William was formerly employed by Clark Oil, retiring in 1998. He formerly served the City of Blue Island as an Auxiliary Police Officer. William was a member of the Fraternal Order of Police and a lifetime member of the VFW. Funeral services for William will be held privately on Thursday, February 6, 2020, followed by a private interment at St. Benedict Cemetery in Crestwood. Please omit flowers.